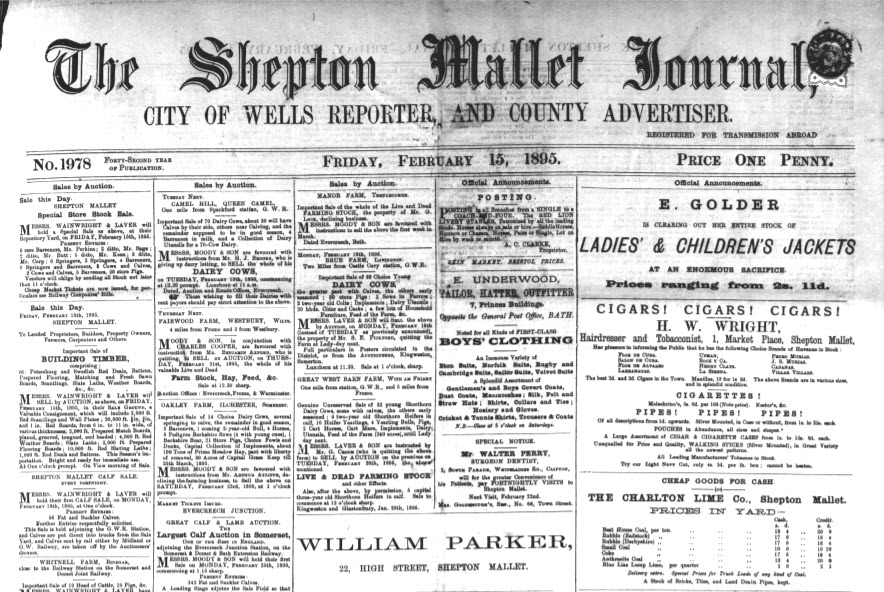 THE JUBILEE.—On Saturday morning, a public meeting was held in the old schoolroom to consider what steps should be taken to commemorate the jubilee in this parish. There were present the Rev. W. M. Leir, rector (chairman), Messrs. C. Welch, J. flown, J. Jeans, G. Corp, J. Lock, W. Longman, J. Francis, T. Vincent, E. King, &c. Mr. Vincent proposed that a subscription be made to give a dinner to all the inhabitants of the parish. Mr. Welch seconded, and suggested that if there was any over-plus it should go towards repairing the churchyard wall, which was in a very dilapidated state. Ho estimated the cost of the dinner, and tea to the children of the parish. at about £80, and if 40 farmers of the parish would contribute £2 each, that would be sufficient to defray the expenses. One or two gentlemen in the room dissented from this view, and, after further discussion, it was decided to adjourn the meeting until Monday, April 4th.

The Ditcheat School Board, at a recent meeting presented P.C. Road, stationed at Ditcheat, with a handsome timepiece, a mark of their appreciation of his conduct when fire broke out at the Ditcheat School. The fire was discovered about one a.m. the constable, who just in the nick of time, aroused with some difficulty, the inmates. Full particulars were reported at the time. The fire had obtained a good hold upon the building, having burnt through the flooring.

The annual Lady-Day Vestry meeting was held on Tuesday morning. The Rev. \T. M. Leir presided over fair attendance. The following parish officers were nominated: —Overseer for the tything of Ditcheat: Messrs. E. King, W. Hodges, W. Bartlett: tithing of Alhampton : Messrs. J Corp, J, Jeanes, and J. Butt; tithing of Wraxall; J. Huntley, S. Golledge, and E. Welch. Mr N. Dyke was re-elected waywarden for the ensuing year ; and Messrs. T. Barber and R. Longman were renominated as guardians. The relief lists were examined, and found to be satisfactory. After the meeting the vestrymen adjourned to the Club room of the Manor House Inn, where a capital dinner was provided Host Hallet.

RINGERS' SUPPER. —The third annual supper of the Ditcheat Ringers and the male members of the church choir was held at the Manor House Inn. About sixty sat down to an excellent supper, served by Mr. and Mrs. Hallett

Ninety-seven electors attended the Parish Meeting here, non-electors being provided with side seats. Punctually at seven the overseer read the notice convening the meeting, and asked the electors to appoint a chairman. Mr. Norris refused to be nominated, and on the proposition of Mr. Bartlett, seconded by Mr. Vincent, Mr. J. Corpe was unanimously voted to the chair. Nominations came tumbling in, no less than 34 being deposited on the table, containing the names of 15 candidates. Several papers were declared invalid, but only one candidate was affected. The names of the remaining candidates were given to the meeting, and questions invited. None being forthcoming the names were put to the meeting in alphabetical order. Mr. Porch, one of the candidates withdrew. On a show of hands the following received the highest number of votes;

Mr. T. Merrifield at once demanded a poll, and Mr. Jones offered to withdraw in favour of Mr. Vincent if the demand for poll was not insisted on. Mr. Merrifield, however, after few words with Mr. Butt, would not give way. Mr. Vincent and Mr. Butt have been elected District Councillors.

Serious Accident.— On Friday evening, a pipe, connected with the heating apparatus in the cheese room, at Mr. G. Longman’s, Hill Farm, burst owing to the severe frost, seriously injuring James Bottle, young man Mr. Longman’s employ, about the head and lace. It was at first feared that the poor fellow would lose the sight of his eyes; hut under the care of Dr. C. P. Coombs, of Castle Cary, he is progressing favourably, and it is hoped his eyesight will be saved.

The Annual Committee meeting of the Ditcheat branch of the East Somerset Unionist Association was held in the Board School on Saturday evening. Considering the inclement weather there was a good attendance. Mr. T. G. Vincent occupied the chair. Several new members were appointed the committee. Mr. Vincent was re-elected chairman, and Mr. E. King secretary. The delegates appointed to attend the Annual meeting of the Central Committee were Messrs. H. Pearce, Board, S. J. Martin, and F. Martin. The other business transacted was of purely formal character.

Dr. Barnardo’s Work —On Sunday last the pulpit in the parish church was occupied the Rev. S. F. Cummings, clerical secretary for the West of England for Dr, Barnardo's Homes. The offertories both morning and evening were given to aid this excellent work. In the afternoon service was held in the Alhampton Mission room. A public meeting was held in the reading room on Monday evening, when Mr. Cummings gave a lecture illustrated limelight views, which was well attended. The collections in all amounted to £5.

Presentation to Mr. G. T. Norris.— On Friday evening last, the members of Ditcheat Choral Society presented Mr. Norris, who conducted the classes during the past winter, with a handsom brass standard lamp, and a finely-chased brass spirit kettle and stand. Mr. T. G. Vincent on behalf of the society, made the presentation in few well chosen words. Mr. Norris in thanking the members, said that he was taken completely surprise, and that the associations connected with the articles they had given him that evening would remain among the most pleasant of his life

Tennis Tournament. —On Thursday last a tournament was held on the ground’ of the Ditcheat Lawn Tennis Club, between Wincanton and Ditcheat Clubs. Wincanton won 106 games, and Ditcheat 86. The Ditcheat Committee provided tea, and a very pleasant time was spent.

LADY DORCHESTER’S HOSPITALITY - On Wednesday evening General-Lier Carleton and the Baroness Dorchester entertained the leading residents of Ditcheat at the old Rectory, where they have come to reside. The party was a large one, closely approaching one hundred, and comprised several members of the family. The music for the dance was supplied Mr. Rumsey’s well-known band from Mallet, and supper Messrs. Fisher, of Bath. The courtesy with which the guests were received was highly appreciated. Great interest was taken the announcement that Lieut. Carleton, of the 9th Lancers. was his way to join the British forces in South Africa.